Why do we need Application Packages for Continuous Deployments?

Continuous deployments are achieved by packaging your full stack – application, environment variables, and infrastructure all together as a complete unit. Your application package is basically your deployment blueprint, seen and known by everyone in the loop. The more people know, the more comfortable they are with increasing the speed of deployments as pushed by your continuous delivery pipeline.

And, for those who know Agile DevOps, communication is everything. When development, testing, and production are all on the same page, even when their environments are different, your software deployment process becomes repeatable.  The application package keeps them on the same page.

…and much, much faster. Which is the goal. 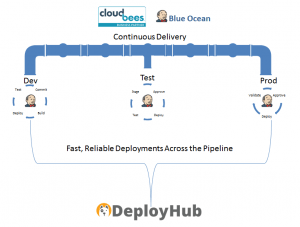 Although agile development teams often maintain an ongoing dialogue about software in development, the testing and production teams are not always included in those daily DevOps conversation. Hence, your new software application package will keep everyone in the loop. It becomes core to your DevOps practice.

DeployHub Pro solves this collaboration challenge by bringing test and production teams into the development conversation with DeployHub Pro’s Blueprint Designer that exposes the application package.

Blueprint Designer defines how the application package is assembled, and makes this information available to everyone on the team. Especially relevant, it displays a software deployment blueprint for each application version that is pushed across the continuous delivery pipeline, and tracks the version to the endpoint.

Unique to DeployHub Pro is the ability to version all of the application meta data. This means that your Application Package is treated just like source code allowing you to ‘check-out’ incremental changes between any two versions. Versioning includes database components, environment variables, infrastructure, and your application level components. Versioning also includes audit information so you can easily see who changed the ‘code’ and when. Every component within the package is versioned, along with any updates, to the installation workflow for that component.

With versioned packages, DeployHub Pro can easily rollback or roll forward a release on an incremental, not monolithic, basis. But best yet, it allows version jumping. Version jumping makes it super simple to move between any two software releases by applying incremental changes to get you there, including database updates and infrastructure changes. Now that is big.

….try that with a one-off script. 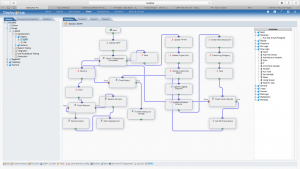 With DeployHub Pro’s Blueprint Designer organizing your applications and components, ad hoc scripting is no longer necessary. This capability extends to defining actions needed during the continuous delivery process and making them available to the entire team.

DeployHub Pro also automates the component definitions, allowing you to share components across ‘domains’ or diverse teams. By sharing components, errors are minimized, and any version of you software deployment is more easily reproduced.

Alternatively, you can restrict visibility, allowing only particular ‘domains’ to reuse a single component.

DeployHub Pro goes further by allowing you to create a release, a group of applications that must be deployed as a single release train. Your software deployment can include as many applications as necessary. DeployHub Pro makes this happen by interfacing with multiple source code version control tools and binary repositories. Therefore, developers can use their favorite tools to reference the location of the component items to be deployed. Further, it integrates with Jira, Bugzilla and GitHub to manage change tickets and Jenkins to track build jobs.

In addition, DeployHub Pro integrates seamlessly with Jenkins, GitHub, Selenium, Ansible, and Chef and Puppet, supporting the tools that development, testing and production teams use the most. This creates a holistic application software deployment blueprint that includes having all components in one place, versioned as a complete unit. DeployHub Pro’s integration allows each team to use the tools they prefer as part of the deployment workflow and blueprint. Most important, both your infrastructure changes and application changes can be combined and managed together as a ‘super package.’ This is the ultimate way to include production teams in your development agile conversation. They are all part of the process. 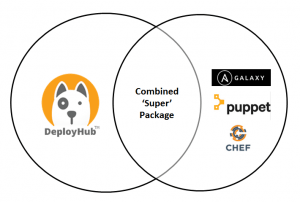 In conclusion, by involving all parties in the Agile conversation, and creating a platform for organizing, versioning, and tracking application package definitions, DeployHub Pro improves the repeatability of software releases to achieve reliable continuous deployments.

Are you ready to get started?  Jenkins users, see how easy it is. 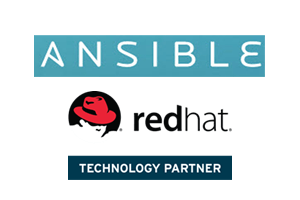