DeployHub Architecture with a Relational Database for Safe, Agentless Deployments

The DeployHub architecture is designed to simplify release automation and improve audit tracking using a deployment version control engine. It includes a safe agentless deployment engine and a relational database for tracking all changes.  Therefore it can easily perform rollback and roll forward processing. Or even better, version jumping.  Version jumping allows you to incrementally jump forward between any two versions, including infrastructure updates and database changes. DeployHub versions deployment packages and reports on all meta data associated to a Component Version, Application Version, and Release Version. 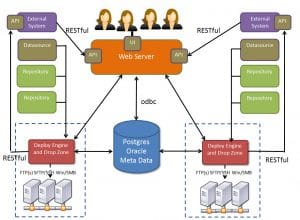 To accelerate deployment processing, the DeployHub architecture uses a ‘Drop Zone’ to centralize processing prior to distribution to the endpoints. With an agent-based system, all processing is done at each endpoint, which means that all of the meta data is brought down to each endpoint, even when it is not needed. This creates network congestion and processing redundancies, slowing down the overall deployment. The Drop Zone determines the needs of each endpoint based on its role (database server, application server, load balancer, Cisco Router, etc), reducing the work required, and eliminating any redundant processing.

Unique to DeployHub Pro is the concept of Domains and Sub-Domains. Domains silo different User Groups and deployment Environments to create a self-service model. Developers fully control their own environments, but can pass the Application Package to another Domain such as Testing or Production. The use of Domains creates a high-level of re-use and sharing, without heavy restrictions on any particular team. Therefore, developers are given the speed and control they need, while testing and production can implement the control and insight they require.